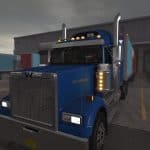 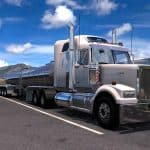 FIXES:
– Lots of various fixes to the external 3D model itself
– Fixed all the object clipping
– Added Trailer Cable support
– Added compatibility for Headache Racks (requires Forestry DLC; only available on the 82″ Cab with the Long or Lift-Axle Chassis)
– Added customizable Exhausts
– Added customizable Mirrors
– Added new Bumpers
– Added new Air Filters
– Added Hood Mirrors
– Added a Wing for the Flattop Cabin
– Added support for SCS “Oversize” Banners, Beacons and Flags
– Corrected the Trim Lights and added an option for the 82″ Stratosphere Cab
– Added Frame Steps on the passenger side for all chassis (except the lift-axle)
– “New” Interior (*See note below on Interior Fixes*)
– Added SISL compatibility
– Added a standard GPS option for those that don’t use SISL Mega Pack
– Fixed the “invisible/see thru” rear bulkhead on the Stratosphere cabin interior when viewed externally
– Corrects and updates the Engine and Transmission options
– Corrects and updates the sounds using Kreichbaums Sounds
– Adds the 4900 to “Quick Jobs” for Regular, Double and Heavy service
– Fixed the 4900 in the Kenworth Dealership from the original mod
– Truck now has its own Western Star dealership in the “Mod Dealership”
– Lots of fixes for various DEF files and attributes
– Icon and texture fixes
– Working animated gauges/dash
– Working windshield wipers/animation (interior only)
– Added WPASS device (unaminated)

INTERIOR FIXES:
The original truck model only contained a single interior based on a 68″ High Roof Cab. I’m working on remodeling it (updating textures, adding animations, etc) as well as creating entirely new interiors for the Flat-top and the 82″ High Roof. This is proving to be a massive project for my 2 month old Blender skills and not knowing if I will ever finish that and in an effort to get this patch out sooner rather than later, I’ve adapted a “place-holder” interior.

I’ve “kitbashed” together various pieces and parts to create a realistic interior view of a Western Star cabin. Thanks to Kishadowalker, I was able to use the interior and animations from an old version of his Western Star 4800SB for the base and rebuild it using textures and components from the original 4900FA interior so I could to get the look/feel right.

This does mean there is only ONE interior cabin model (2 different color variations though) even though there are 3 different external cabin models. To keep the illusion of multiple cabin interiors, I kept the original external views that were created by Sib3rius for the interior so when you look at your 4900FA from the outside, it will have the normal cabin that coincides with the chosen sleeper configuration. However, the interior view will reflect that of a 54″ Mid Roof cab regardless of the exterior cabin selection. Honestly, after many hours of play-testing, I don’t notice it at all.

KNOWN BUGS & ISSUES:
1. External windshield wipers aren’t animated
– The external wipers are just “decoration” on the original model too and getting them to work was more troublesome than it was worth.
2. The WPASS is texture only
– Apparently I can edit animations fine, but creating new ones is where Blender and I disagree. I’ve spent hours on this and still can’t get the red/green light animation right.
3. There are 2 “too many vertices” errors in the log with this truck. They do not effect gameplay or FPS in any way and they don’t spam the log.
– They’re caused by the original UV mapping that I didn’t change so other mods and paint jobs would (should) still work.
4. The trailer cables clip through the headache rack on the 82″ Stratosphere Cab
– Yup, they sure do. That was a design decision on my part as even on the Long/Tag Chassis, I was running out of room back there. In any case, I’ve set it up so it looks like the cables are fed through the rack (just
like my neighbors VNL actually). Eventually, I may replace the “pogo stick” with an “airline box” for that particular situation in the future.