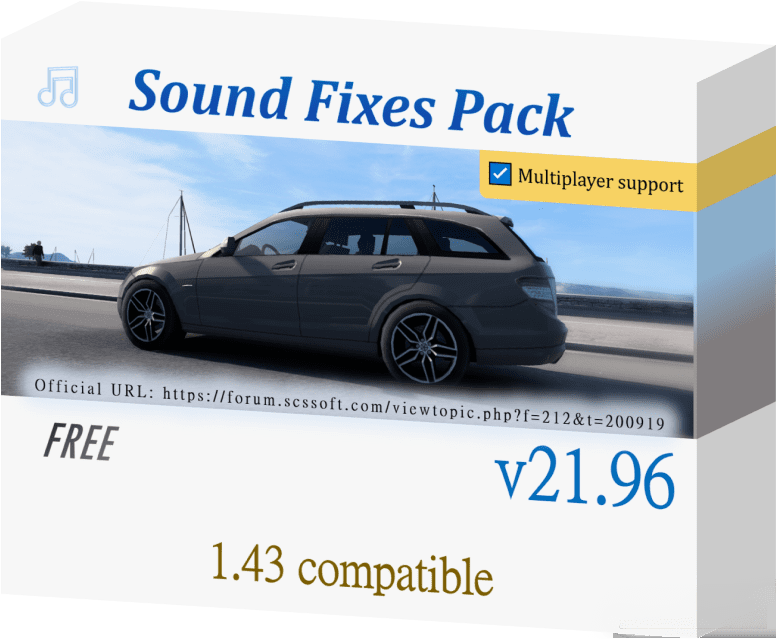 CHANGELOG v21.96
Horn sounds added for the 2008 Mercedes-Benz C-Class (W204 2008) in AI traffic.
“Removed harvester sound” feature is back and ready for grimes’ seasonal mods, with the exception of New Summer. [ETS2 edition]

— Other news —
Winter sounds addon has been updated to version 2. It’s available on the Steam Workshop in time for the Winter season.

For TruckyMods users: Guest downloads are now available for the Sound Fixes Pack.
It is no longer mandatory to sign up to download the mod from there.

Note: The 1.43 attenuation and equalization fixes for interior cabins of vanilla game trucks will expire in the next mod update on December 14, 2021.

DESCRIPTION
– Pack provides essential improvements to common sounds in the game for increased immersion.
– For over 6 years, this mod has proven to be a welcome addition for anyone wanting an immersive experience.
– The Steam Workshop version is highly recommended for quick and easy updates, maintained for the current game version.
– The mod is the most safe on the Steam Workshop, having procedures in place for adapting to major game updates.

COMPATIBILITY
* ETS2 1.43.1 + ATS 1.43.1. No errors in game log. Must have high priority in Mod Manager.
* Supported in single-player and multiplayer Convoy mode.
* Compatible with all maps and all trucks, including truck mods.
* Does not replace individual truck sounds, so this mod can be used with an unlimited amount of truck sound mods of your choice.

OTHER CHANGES
For further realism, the mod may also add official colors to each AI traffic vehicle it modifies for sound, with rarer colors less likely to be seen.