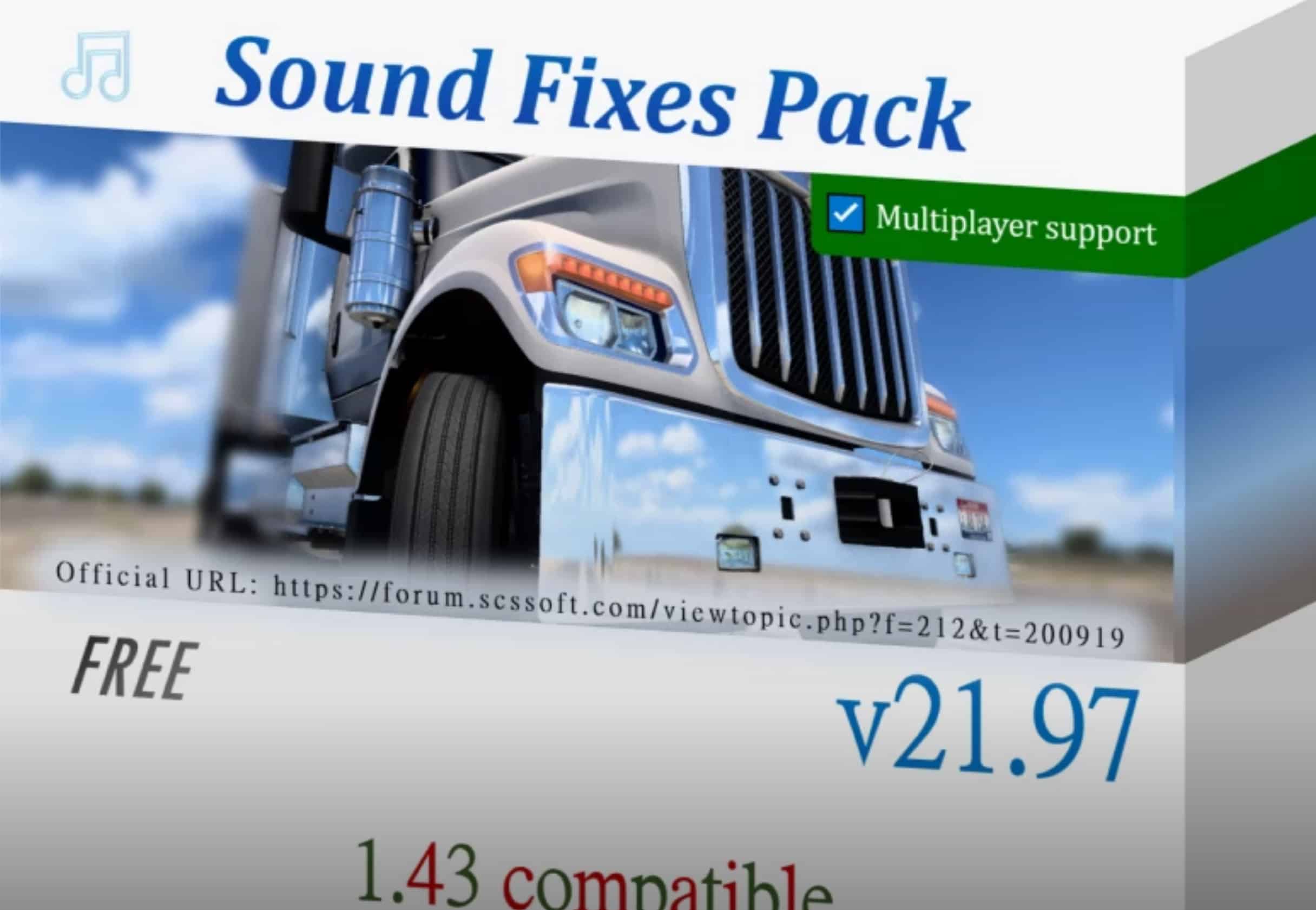 CHANGELOG v21.97
Rework of tire sound on asphalt mix with a blend of tire whine and interior rumbles, now better adapted for all camera views.
Temporary 1.43 truck attenuation fixes are now expired. This is in order to pave the way for sound mods that will implement their own attenuation for the base game trucks.

DESCRIPTION
– Pack provides essential improvements to common sounds in the game for increased immersion.
– For over 6 years, this mod has proven to be a welcome addition for anyone wanting an immersive experience.
– The Steam Workshop version is highly recommended for quick and easy updates, maintained for the current game version.
– The mod is the most safe on the Steam Workshop, having procedures in place for adapting to major game updates.

COMPATIBILITY
* ETS2 1.43.3 + ATS 1.43.1. No errors in game log. Must have high priority in Mod Manager.
* Supported in single-player and multiplayer Convoy mode.
* Compatible with all maps and all trucks, including truck mods.
* Does not replace individual truck sounds, so this mod can be used with an unlimited amount of truck sound mods of your choice.

FEATURE LIST
The mod features dynamic and realistic sounds, covering the following:
– The ultimate variety of suspension and tire bump sounds when driving over curbs or bumps in the road.
– Fuel / gas station sounds.
– Door close and seatbelt sounds after refueling.
– Train sound enhancements, including comprehensive sounds for all base game locomotives in American Truck Simulator.
– Real tire and road noise for all terrains: asphalt, gravel, grass, and sleeper lines.
– Nokia phone ringtone sound replacing the hurry up / late music, leading to less stress for the player.
– Default common sound replacements, such as the default air brake sounds.
– Improved sounds for some AI traffic vehicles, including sounds for Jazzycat’s Motorcycle Traffic Pack.
– AI traffic truck and bus air brake sound replacements.
– English UK/US voice navigation variants with speaker effect added and no unrealistic phrases.
– Wind buffeting and rush of air sounds at high speeds only when the window is open.
– Location based sounds of environment.
– Sounds for animated objects such as F22 jet fighters and biplanes.
– Trailer coupling and trailer brace rotation sounds.
– Two standalone air horns.
– Softer mix for the Musical Road in American Truck Simulator’s Historic Route 66.
– Dynamic rain sounds and an assortment of varying thunder sounds.
– The default wiper sound may now squeak only when the windshield is dry.
– (Optional) Reefer / refrigerated trailer sound functionality that can be activated by trailer mods.

OTHER CHANGES
For further realism, the mod may also add official colors to each AI traffic vehicle it modifies for sound, with rarer colors less likely to be seen.