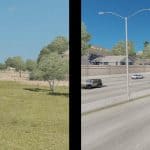 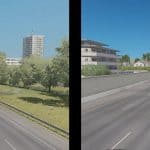 Changes v11.0
Expect weird things to appear at some places as 1.38 is still in beta. During my testing a minor update made the Bellagio gate in Las Vegas suddenly turn giant. Another update made trees appear clipping through some highway overpasses, thankfully they’re not solid, but still an eyesore. These issues are present in vanilla, they’re not introduced by my mod, but they’ll persist if they’re in areas edited by the mod since SCS’s fixes won’t apply to them in that case.

Fresno, CA-99 is done up to halfway to Fresno and vanilla signage has been replaced with the post-Arizona sign templates in the Los Angeles area and the reworked CA-99 area. Had to take some artistic liberties in some places due to how different the road network is in the game compared to real life.